Geneva Health Solutions was launched out of Worrell Inc. in 2012 when two cardiologists and a team inside Worrell had the vision to harness the power of implantable cardiac data to transform patient care. Today Geneva has created a cloud-based platform that aggregates data from all major cardiac implant manufacturer systems, and manages this workflow as a servicer to clinics and hospitals across the US.

“At Geneva we did what every market needs, we identified major inefficiency in how implantable cardiac data was being used and found creative ways get it moving safely and securely. We saw a highly competitive environment where no one was collaborating, we saw that cardiology clinics were chronically behind in managing their remote monitoring and that patients could get a better care. We used technology, UX, and amazing service design to gain leverage over the problem and added some entrepreneurial grit when the going got tough.” – Kai Worrell, co-founder of Geneva, and CEO of Worrell Inc.

In a comment from Monday’s (January 28th) press release, BioTelemetry president and CEO Joseph Capper said: “We are extremely excited about the combination of these two market-leading, technology-enabled service providers. Just as we revolutionized remote cardiac outpatient monitoring, with our MCOT service and platform, Geneva is transforming the way physician offices consolidate and manage the monitoring of implantable cardiac devices.

Yuri Sudhakar, Chief Executive Officer of Geneva added, “We are excited to join forces with a company that has established sustained success as a healthcare service provider in the same market that we serve. Cardiology providers are looking for strategic solutions to improve patient care and workflow. We provide these solutions by leveraging technology to deliver better patient care and a better patient experience. We think this powerful combination of complimentary tech-enabled services provides Geneva the necessary resources to significantly expand our reach in the over $1.0 billion domestic implantable cardiac device monitoring market, delivering the much-needed benefits of our technology and service to cardiac practices, physicians and patients.” 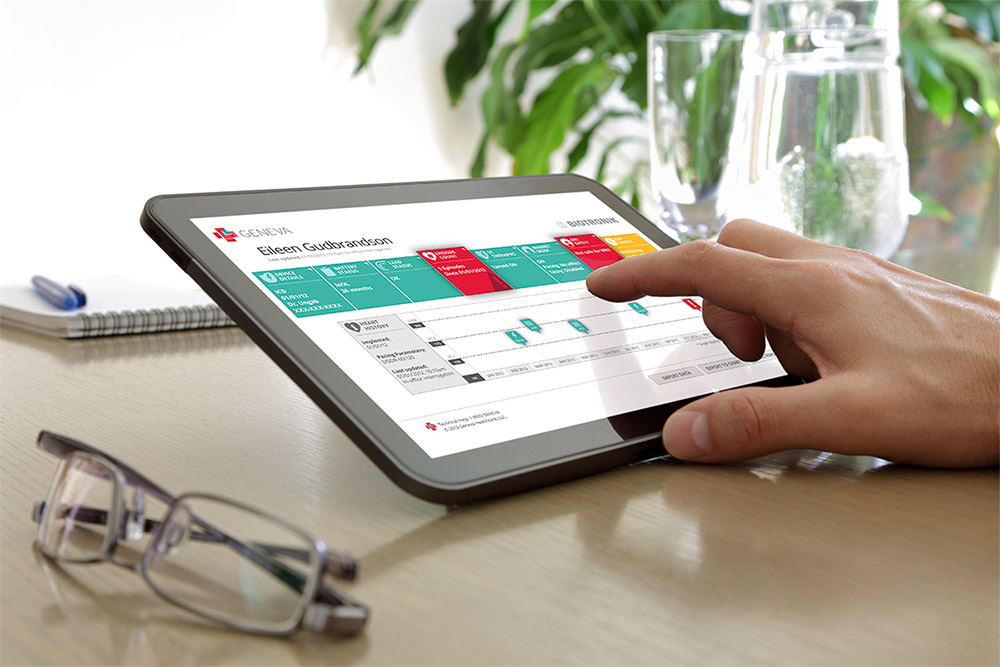 REFLECTIONS ON DESIGN, ENTREPRENEURSHIP, AND SCALE

Geneva started out as a few entrepreneurs with some unique insights on the challenges the market faced in managing patients with implantable devices and their remote monitoring.

Worrell had been focusing on the design and user experience of next-generation digital health devices and solutions. In conducting ethnographic research, the Worrell team had the chance to meet two cardiac electrophysiologists with deep experience in the value and shortcomings of cardiac remote monitoring. Dr. Ungab had an unconstrained imagination on the promise of health information, and had a vision to consolidate and organize a gateway of high value clinical patient data into the EMR and beyond. Dr. Wadhwa brought a rigor to the clinical and scientific demands of using the physiological data for patient care. The team formed a company with Kai Worrell as the CEO, Dr. Ungab as the Chief Medical Officer and Dr. Manish Wadhwa as it’s Chief Scientific Officer. As the company developed it became clear that there was major opportunity to get more from the powerful devices that guard the lives of millions of patients around the world.

After laying the foundation and vision for the company, and raising several millions of dollars from angel investors the company started to take shape. Geneva was attracting talent, built a product that was tested first at UCSD with the support of Dr. Ted Chan, and Dr. James Killeen. The next breakthrough came, when Yuri Sudhakar, fresh off another technology sale, joined the company, eventually to become Geneva’s’ second CEO and the one who would build beyond a pilot and a concept and create a Geneva culture, team, sales model, and scale.

Regarding the company’s continued growth and success, Kai Worrell noted, “The company almost failed at a couple key points. We were truly fortunate to have found Yuri Sudhakar who became a zealot for the vision, left a lucrative executive sales job, put his life on hold and untapped his leadership potential by building past the start-up team, and crystalizing a model that worked.

The last critically important task was to find a strategic partner to help us scale, and we found a rocket ship in BioTelemetry, just check their track record. I couldn’t be more proud of all the people that contributed to building a quality company that truly hits the triple aim in healthcare.”

Let’s Collaborate on Your Next Big Idea!